AMERICAN STYLE
Yeeeee ha!
Or, to put it another way, they did quite well at the American Speedfest.
In fact, Boss Racing came away from Brands Hatch on Sunday 11 June with two wins and a second from the three races contested.
And, on top of that the team enjoyed a public tribute to its services from the hero of the week-end’s trio of Bernie’s V8s races. Once again, Tim Davis had blitzed the opposition, this time at the well-attended annual stars and stripes bonanza held this year under a clear blue sky at the popular Kent venue.
And his success was achieved with a brand-new car. In place of the familiar grey TVR Tuscan was a new Boss Racing-built white and red car which proved fast and reliable all week-end.
He planted it firmly on the front row of the grid for the first race in a huge thirty eight car field and, from the rolling start, was well-placed to snatch the lead from pole man Bill Smallridge in his be-winged Sunbeam Tiger.
A spin by Smallridge made it easier for Tim and at the flag he was 10 seconds ahead of the agricultural-looking but highly effective Allard J2 of John and James Plant. In his post-race podium interview Tim said: “Thanks to Boss Racing. They always do it for me.”
On Sunday Tim started the second race from pole. He again took an early lead but was harried by the burgundy Tiger. It ran out the winner of the 15-minute race after a stumble at Druids which Tim later attributed to his tyres. But for this, as Autosport remarked, he might have achieved a hat-trick.
For the final 25-minute race the finishing order of the first ten in the second race was reversed and Tim started from ninth on the grid. Undaunted, he was up to second by the second lap and in the lead by the third. This was despite contact between the Tuscan’s rear and the Allard’s front at Clearways which lifted the TVR’s inside back wheel bodily off the ground.
But Tim continued at undiminished speed. And although Smallridge closed the gap the Sunbeam seemed to suffer a problem which slowed it drastically. Despite a safety car interlude, the TVR crossed the line over 17 seconds to the good. 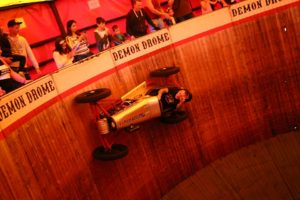