Much of the day’s racing had been affected by showers but this was something different. It was supposed to be the last race of the day and the cars were on the grid but it was, quite literally, a wash-out.
That meant our drivers competed in just one race at the Classic Sports Car Club’s Cheshire Challenge Meeting. Oulton Park’s a long way to go for just one race, especially if you’ve got to make the journey from Kent twice. But on the credit side, we did get a second place and had the pleasure of seeing one of our drivers play himself back in after a year’s lay-off with a class win.
Colin Watson and Gary May drove up to Cheshire with our number 92 and 93 cars to take advantage of the Friday test session. They were able watch Hugh Coulter gain track time after his year away before heading for home: the Magnificent Sevens and open series races were not to be run until Bank Holiday Monday.
When the team re-assembled at Oulton for qualifying the track was damp and the weather changeable to say the least. However, Tim Davis (Caterham C400 2400) celebrated his 50th birthday by taking second spot on the grid behind local resident and Oulton Park Specialist Danny Winstanley. They were the only two drivers to record sub-2 minute laps.
Colin Watson (C400 2400) put up the fourth fastest time, while Hugh (C400 2000), no doubt benefitting from his test session, was sixth and leading his class. Peter Hargroves (Superlight R 2000) was 19th and third in his class and Peter French (Superlight 1800) was 32nd and first in class. 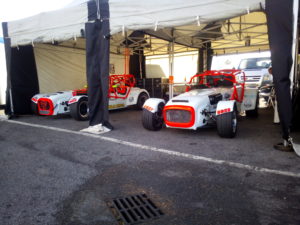 For the race Tim elected to start on dry tyres with Colin and Hugh on wets. But as the cars were heading for the assembly area it started to rain. As there was no time to change Tim’s tyres we told him to take it easy and pit early.
He was the first to stop and we put two wets on the car’s left-hand wheels since that’s the side which does much of the work at Oulton. Colin and Hugh came in later by which time the rain had stopped and conditions were looking more stable. We put dries on their left-hand wheels.
Meanwhile, Tim was struggling. He was finding it increasingly difficult to control his car on a drying track with worn wets. So he did well to finish second to Silverstone victor, Stephen Nuttall. The mercurial Winstanley had dominated the early laps but fell back to retire on lap 15, minus his exhaust!. Colin was also out of luck. In a repeat of the trouble he encountered at Silverstone, Colin suffered crankshaft sensor failure, retiring on lap 10 of 22.
Hugh Coulter, though, finished the race a very happy man. Not only did he come home fifth but he won his class with a great move on the last lap, crossing the line 0.1 secs ahead, and was credited with fastest lap. 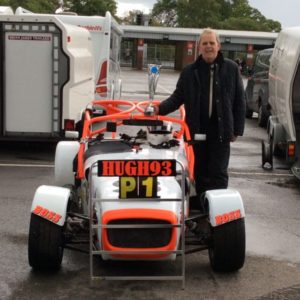 Hugh after his brilliant class win

Peter Hargroves had been forced to start the race with a broken seal on his clutch master cylinder. That left him with an inoperative clutch just as he was about to head for the assembly area. Fortunately our rapid repairs held out and he finished 13th and third in class. Peter French came home 24th.
And so to the last race on the programme. Qualifying for the Verum Builders Open Series event took place on a damp track and once again Winstanley ended up quickest with Tim behind him. Hugh was fourth and second in class, while Colin was placed fifth, his best time having been disallowed because officials said he’d infringed track limits.
By the time the cars were forming up on the grid the heavens had opened and torrential rain was hammering down, soaking the drivers. It was probably a relief to them when officials displayed a “race aborted” sign.
That was it. We splashed back to the paddock and packed our sodden gear for the long drive back to Kent.

Our next outing was at Brands Hatch and, as events turned put, it was fortunate that we were close to home. We were supporting Tim Davis, now TVR mounted, who was running in the three Bernie’s V8s races at the American Festival.
He had entered a newly-acquired Tuscan with Rover V8 power but during qualifying suffering from a misfire and intermittent lack of power. As a result he qualified fourth on the grid.
At the start Tim jumped into third place and stayed there for three-quarters of the race but then the power loss returned and he dropped back to finish fourth. He started the next race from the second row of the grid and this time the car was running better but a spin at Clearways pushed him down the order. He was starting to catch up but ominous noises caused him to pull off the track on the last lap.

It turned out that the silencer had almost parted from the exhaust. The noise had been caused by the silencer dragging on the track surface and, obviously, failing to do its job properly. A quick inspection revealed that it would not be a quick job to repair it so we asked permission to start the third race with a substitute car.
This was granted and a quick trip back to the workshop enabled us to get Tim back on the grid – albeit, right at the back – in his trusty silver Tuscan. But this signalled the start of a really great comeback drive. He scythed through the field to reach third position by the 8th lap. But then the safety car was deployed and, with seven minutes left to run, the race was red flagged and the results declared as at the end of the 11th lap.
By then the field had been depleted by multiple DNFs and disqualifications, although that shouldn’t detract from Tim’s performance. He also set the fastest lap of the race in a great drive which left us all wondering what Tim he might have achieved had he been in the car from the beginning..
I suspect he’d have left Brands with three victory trophies. 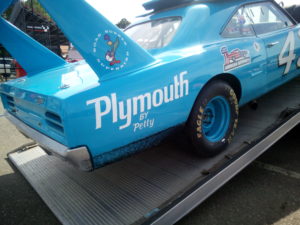 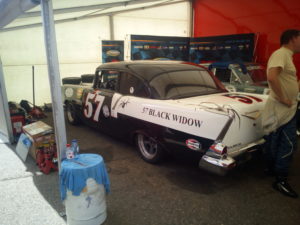