The weekend of 6-7 April was chilly even for Snetterton, but the Classic and Sports Car Club’s season opener still produced some solid results on Boss Racing’s first competitive outing of 2019.
Higher track temperatures might have enabled us to come away from Norfolk with more, but a win and two second places was nothing to ashamed of. The fact was, though, with temperatures in single figures, we struggled to get our Kumho tyres up to working temperature.

Altogether, Boss Racing was supporting no fewer than seven cars at Snetterton. This year, Christian Pittard’s CSR has a new 2500cc engine from Mountune, who left us guessing about its power output. Mountune keep their data close to their chests but the speeds the orange car was seeing in testing, albeit with the help of hurricane Gareth, were franky astonishing for a Caterham.
Friday testing and qualifying for the two races we were contesting proved pretty uneventful. The first of our two races, which opened the weekend’s programme, was the Verum Builders Open Series event. Tim Davis (Caterham 7 C400) was quickest, just 0.097 sec ahead of Christian. Richard Carter (R300) was fifth, just ahead of Colin Watson in the No 92 C400 2400, while newcomer Lewis Harman was in our class ‘F’ C400 was 12th and third in class.

Tim grabbed the lead at the start with Christian in close attendance. They made their pitstops on laps five and sixth respectively, allowing Colin to take over at the front for one lap. Tim was soon back at the front, though, but with two laps to run Christian used the power of his engine to move ahead and win by just under two seconds. He also set the fastest race lap.
Colin was fifth, seven seconds up on Richard, while Lewis crossed the line to take 12th and third in class. Four of the first six finishers were Boss Racing runners and the only non-Caterham in the top six was the Lotus Exige V6 Cup of James Little.

No fewer than seven Boss-supported competitors took part in qualifying for the Gold Arts Magnificent Sevens event, which was the fourth race on the programme. This time, Christian had to play second fiddle to the Series 3 C2400 of Stephen Nuttall whose narrower Avon ZZR’s seemed quicker to reach working temperature.The fastest runners were all out together on the third and fourth laps for what turned out to be an impressive piece of slipstreaming from which Tim emerged third fastest and Colin fourth. Richard Carter was sixth and Lewis Harman an impressive eighth with only 220hp. Regular runners Peter Hargroves (Superlight R2000) was 19th and Peter French 33rd, while Ben Whibley of MotorsportDays fame who was sharing our K-series-engined Supersport 1600 with his father lined up 32nd.

In the race Nuttall drove superbly to dominate proceedings, although Colin livened things up with a late-braking move on Christian and Tim in to the first corner. Nuttall was able to stretch out a 4.5 sec lead by the end of the first lap and kept it after the pitstops chased by Tim and Christian. At the finish Christian was 21 sec behind with Tim demoted from third to fourth for some exuberant driving – aka track limits.

Colin, meanwhile, retired on the tenth lap when his undertray worked loose. He came into the pits to have it fixed but decided it was pointless to continue at that stage of the race. Richard was fifth at the flag, while the ever-improving Lewis took a class win with ninth overall. Peter Hargroves was 16th and second in his class, while Peter French took 28th place. The Whibleys might have brought up the tail end in 31st place but were all smiles after what they considered a great experience.

And that is surely what it’s all about. Our next outing is on 4/5 May at the CSCC’s Silverstone meeting and we are hoping for sunshine.. 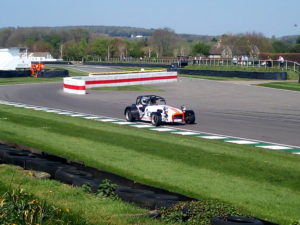 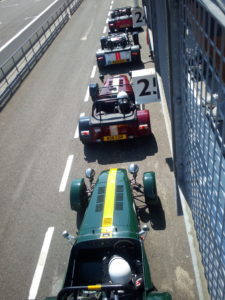 A rather more genteel day was had at Goodwood for the Bognor Regis motor club sprint over the Easter weekend. The Lotus Seven club had been invited so there was a whole array of Sevens including one of our customers, Peter Seldon, in his Duratec R500. Always a great place to visit especially with the glorious sunshine. After the first timed runs we retired to drinks in the flying club where Peter decided not to bother with the second timed run as he had a dinner party to get back to! I could get used to this sort of motorsport! 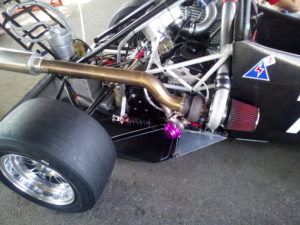