With the season now underway the Boss Racing truck headed off to Snetterton at lunchtime on the Thursday in order to set up for testing Friday, preparing the cars Saturday and racing Sunday.

All went smoothly during testing for Richard Carter, Jonny Pittard, Hugh Coulter and Jeremy Adams so I headed back to base to see a couple of customers leaving the team to prepare the cars. The team went out for a meal and a couple of drinks before heading back to the circuit and bedding down for the night. Or at least some of the team did. It seems while the cat was away a couple of the mice decided to play and apparently our newly aquired disco ball was lighting up the paddock in to the early hours of the morning!

The two errant rodents finally surfaced by mid-afternoon and the cars were ready to go for qualifying on Sunday morning. The Team Leos cars of Stephen Nuttall and Christian Pittard were flying having tested at Snetterton after Thruxton but while Tim, Colin and Jonny were a few seconds off the pace with a faulty oil pressure sender, leaking water hose and sticky throttle respectively, we knew from pre season testing the kind of pace they were capable of. And of course, it was due to rain in the afternoon and that would play in to our hands…

Richard was first in what is now a super competitive Class F and Hugh 4th, the Redmans 3rd in Class E and Jeremy Adams 2nd in Class B only  0.3 seconds off the class pole. So all through the field we were feeling bullish and, of course, it was due to rain…..

I have been at plenty of wet race meetings. Spa is renowned for spells of heavy rain. I remember a meeting at Croft a couple of years ago where some of the drivers came in because the circuit was undriveable. But I have never seen rain quite like this. It started at lunchtime and carried on for ninety minutes flooding the paddock, infield and circuit. When it finally stopped course cars began circulating to see how much of the track could be distinguished from the grass while circuit staff called up tractors and pumps. We changed all the settings on the cars in the hope that we might get at least one race but, around 4.00pm the rain returned and just as hard. We knew it was all over before the announcement was made so having been at the track for four days we began the task of packing up while getting soaked.  As we drove home with dripping clothes and squelching boots we started planning for Donington in five weeks time. Surely that would be dry, wouldn’t it? 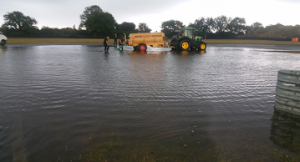 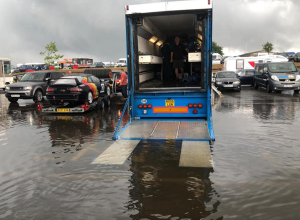 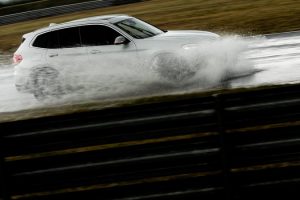 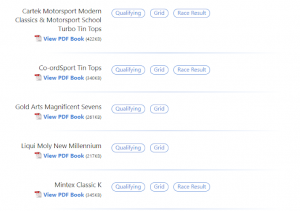