Guess which was our most popular piece of equipment in Belgium. Here’s a clue: the temperature was 42-degrees in the shade. Actually, there were two pieces of kit which seemed to be in almost continued use that weekend – our collapsible pool and the hose other teams borrowed from us to fill the ones they had rushed out to buy!

Baking in Belgium and sweltering at Spa certainly represented a pleasant contrast to the CSCC’s previous meetings at soggy Silverstone and oozing Oulton. They were dominated by rain. Having a pool in the paddock alongside our double awning meant the drivers could cool off between races on the demanding Spa circuit. 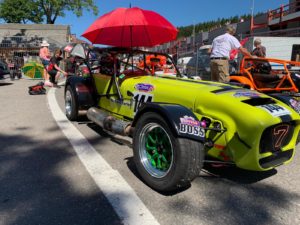 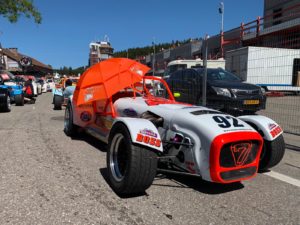 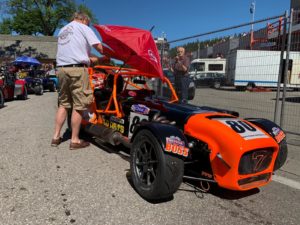 We arrived on the Wednesday evening before the meeting with three Caterham Sevens for Tim Davis, Colin Watson and Richard Carter, plus the TVR Tuscan of Keith Vaughn Williams. An uneventful Thursday test enabled Keith to dial himself back in to racing after two years away from the circuits and to be initiated into the secrets of Spa.

In conjunction with the YTCC (Youngtimer Touring Car Challenge), the CSCC had organised a series of what were essentially all-comers’ races which included a class for Caterham Sevens. Unlike the club’s domestic Magnificent Sevens series, the three contests were of 30 minutes’ duration and didn’t involve pit stops. 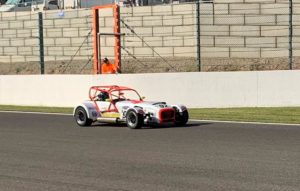 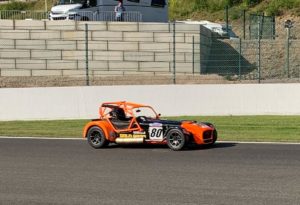 In qualifying Tim took third place on the grid with his C400. This meant he would effectively start as the second fastest Caterham behind our nemesis, Stephen Nuttall, who took pole. Colin (C400) lined up sixth overall and third fastest Caterham, while Richard recorded ninth fastest time overall.
Sadly, he wasn’t able to take his place on the grid. A broken timing chain meant that, in the absence of a replacement, his week-end’s racing was finished before it had begun. Another Boss Racing customer, Peter French, was 43rd with his Superlight.

It was an eclectic mix of cars but qualifying suggested that two runners in particular, a Zakspeed Turbo Capri and a Cobra replica, would need to be watched, in addition, of course, to the rapid Nuttall. And it was these three cars which duly secured the first three places in the opening race. Tim and Colin finished second and third in the Caterham section. 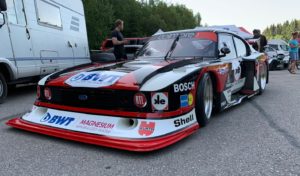 For the second race, the cars lined up on the grid in their previous finishing order but a series of accidents brought out yellow flags and the safety car. Failure to pick up the leaders meant that when the safety car pulled in the race leaders had to battle their way through the back-markers. Tim became involved in an exciting race with the Zakspeed but lost second place overall by less than 1.5 sec. He still finished second in the Caterham section with Colin second and fifth overall.

Confusion before the start of the third race saw the Zakspeed head for the pits with some of the other runners – including pole-sitter Stephen Nuttall – following him Pied Piper style. Tim managed to avoid doing so but hesitation dropped him several places down the order at the start. He made them up, though, and led the race until passed by the Cobra, which was the eventual winner. Colin was second and fourth overall.

In race two Peter French had an accident at Blanchimont, which meant we had work to do to fix it for race three. It was worth it, though, because Peter finished 31st and won his class. He’d been classified 44th in race one so he was well pleased.

Keith qualified 52nd for the first of the CSCC’s two Inter-Series cup events. Despite it being his first race at Spa he was remarkably relaxed before the start, so relaxed, in fact, that he failed to take his place in his Tuscan in time to make the grid. As a result, he had to start from the pit lane. Undaunted, though, progressively improved lap times set him up for a 41st finishing position.

For the second 40-min race, Keith was determined not to be late for the start. But while other drivers made their mandatory pit stops during a safety car interlude, Keith missed this opportunity. On top of that, when he did stop he was slow away, which undoubtedly cost him time. His finish in 34th position represented a good effort, especially as he snatched third place in class on the last lap.
And his reward? A dip in the pool, what else? 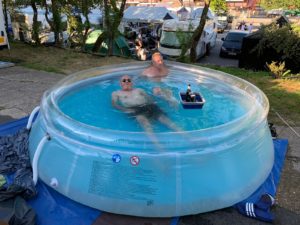