Crash, Bang, Wallop!
I must admit we’ve had better days than Saturday 12 August. We were just two laps into qualifying for the Meteor Suspension Open Series race at the Classic and Sports Car Club’s Castle Coombe meeting when the engine of my Caterham C400 went bang.
As I came off the throttle for Tower, the internal components made a bid for freedom and then on the very next lap a Renault Clio dropped coolant on the track causing the session to be red-flagged. So that, short of a five-hour round trip back to Longfield for another car, which I really didn’t fancy, brought my week-end’s racing to a premature end. Even so, Colin Watson was credited with sixth fastest lap in the C400 we built for Spa, and Peter Hargroves, 30th. For what it was worth, my time was good enough for 14th on the grid.

The abbreviated session meant that the cars were jumbled up on the grid which may well have led to what happened soon after the lights at the start. Almost immediately, a Caterham C400 and a BMW M3 collided with an impact hard enough to slice the rear end from the Caterham and hospitalise the driver. The race was red-flagged and not re-started. Game over, Colin and I completing two laps in the whole day.

It could only get better. That said, qualifying for Sunday’s Gold Arts Magnificent Sevens race was fairly fraught. With just five minutes of the session remaining another competitor spun just as Tim Davis (C400) was passing him. Tim’s front end was knocked off in the ensuing crash. He’d still done enough to secure 4th on the grid. This became 3rd when the rapid Gary Bate was penalised for being too successful in previous races and sent down the grid. Jonathan Pittard lined up on pole in his Superlight R and Colin Watson 2nd. Peter Hargroves started 12th. Meanwhile, we had some repair work to do. Out came the welding gear and part of the vanload of spares we always take with us. In fact, we probably carry the equivalent of a complete Caterham in boxes! In addition to the welding work, Tim’s car needed a new steering column, two new wishbones and an upright. The car was looking a bit second-hand but at least Tim could take his place on the grid. 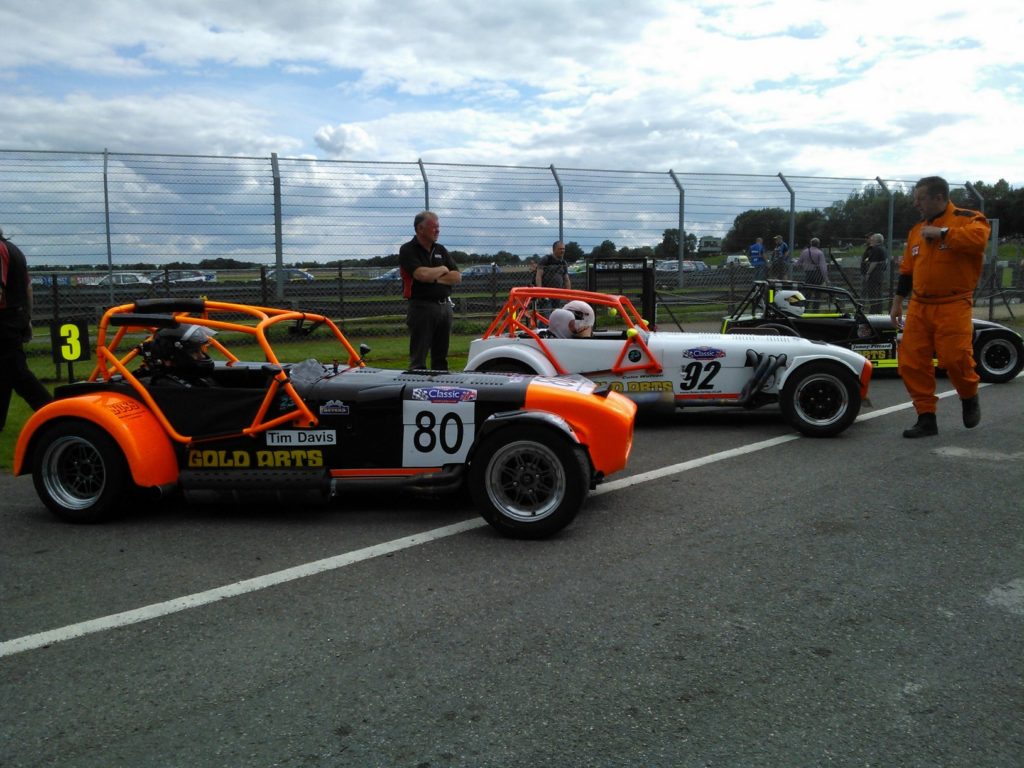 At the start Gary Bate had a miraculous start and shot up to second, while Jonny and Tim went backwards, dropping back to 4th and 6th respectively. As dust settled Colin led while Bate was coming under increasing pressure from Jonny and Tim which allowed Jonathan Mitchell to join in what was now a five car battle for the lead. However Colin held his nerve and led… until the pitstops.

The pit entry at Castle Combe is tortuous and Gary Bate attacked it in a fashion that Sebastian Loeb would have been proud of and this combined with other cars dawdling and holding up some of the Boss boys meant that Bate emerged form the pit stop period with a twelve second lead.
Tim drove his socks off to finish second to the inevitable Bate. But Colin was less fortunate. He was up to 2nd place and lapping another car for the second time that clearly didn’t see him and moved over. The resulting wallop took Colin out of the race. Peter Hargroves, though, was delighted with his 11th place, his best result yet.
The Boss Racing / Team Leos rivalry continues at the Brands Hatch Lotus Festival on 2nd September where Jonny’s brother Christian will be back with his CSR and the team will be looking for success on home turf.

As well as preparation and supporting our customers at race meetings, Boss Racing has also been busy setting up cars. Recently we’ve done a couple of Minis and a pair of Clios. We’ve also worked on Dean Halsey’s lovely Datsun 240Z and John Hilbery’s attractive Lenham GT. We also re-built the Lenham’s engine. Both these cars are running in the CSCC’s Swinging Sixties series and both are shared with Wil Arif, who has declared himself delighted with the results of our work.

We’ve also been setting up some other cars. As I write this, Paul Adams’ rapid Ford Focus is sharing our workshop with Rod Birley’s familiar black Escort Cosworth WRC.

Mention of Rod reminds me that at the BARC’s championship meeting on 29/30 July he very kindly paid tribute to Boss Racing’s efforts with the Peter Bevan-owned Honda Integra R. My dad, Dave Singleton, had rebuilt the Integra’s engine at the start of the season.

After coming second (and first in class) in the first of the two Cannons Motorspares Tin Top rounds, Rod said in his post-race podium interview that the car was “brilliant.” He added: “hats off to the team” and included Boss Racing in this team, which had helped him to the class win that represented his 613th victory. Thanks, Rod.

Boss Racing client Chris Whiteman then won the second Tin Top blast after a demon start from the second row. Three cars went up Hailwood Hill and into Druids side-by side. Chris emerged in the lead where he stayed, just ahead of Rod. It was a great drive.