The spring bank holiday week-end represented a busy time for Boss Racing. We made two round trips to Silverstone followed by a visit to Castle Combe and a gearbox change to round it all off.

It was worth it, though. Silverstone yielded a win, two seconds and third plus sundry class wins. We were at the Silverstone International circuit for the CSCC’s second meeting of the season to support no less than eight runners in the closely fought Gold Arts Magnificent Sevens series. We arrived early on Friday for the pre-meeting test day. It was relatively drama-free except that Christian Pittard was complaining about clutch issues with his 2.5-litre Seven with its powerful Mountune engine.

Qualifying for the race and the race itself weren’t due until Sunday and as there wasn’t enough room for us to park at the circuit – according to the ever helpful Silverstone staff – we decided to go home on Friday evening and come back early on Sunday. How much do you love the M1 at the moment? 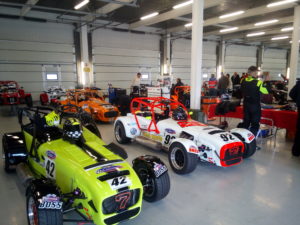 Christian was still complaining about his clutch but qualified second for the race. Close behind him were Tim Davis and Colin Watson with Caterham C400 2.4s, and Richard Carter (R300 2.5). Richard was troubled with a mysterious loss of power which took the edge off his performance. Peter Hargroves (Superlight R300 2.0) was 14th, William Redman (420R 2.0) was 17th and first in class, with Alex Harbour (Supersport 1600) 24th – he too was fastest in his class – while Peter French (Superlight 1800) was 31st and second in his class.

Mindful of his clutch problems, Christian eased his car off the line at the start of the race and dropped down to fourth, so it was Tim who took up the initial chase of pole-sitter Stephen Nuttall. It was gratifying to note that our quickest runners were now closer to the highly competent and experienced Nuttall than they were at Snetterton.

When Christian passed Colin to take third place he quickly closed on Tim and pretty soon the pair were locked in a duel for second. The top three pitted early and the two Boss drivers used their experience to take time out of Nuttall with Tim barely a second behind as the pitstops unwound. However Tim drifted back in to Christian’s clutches and their battle began again. This allowed Nuttall to eke out a lead once again and he won by just under 8.5sec from Tim. Christian set the fastest lap by 0.4 secs.

The chart below shows the gap to Nuttall through the race with the pitstops coming between laps 10 and 15. 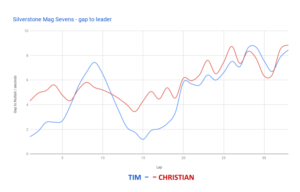 Meanwhile Colin had retired on the 15th lap with a broken crankshaft pulley. This, in turn, broke the crank position indicator. Richard was fourth, still troubled by lack of power despite a change of plugs and coils before the race. Peter Hargroves was 14th, while William Redman and Alex Harbour both won their class, finishing 17th and 19th overall respectively. Peter French was 27th and second in his class. Christian set the fastest lap of the race with William and Alex both the pace-setters in their classes.

Unusually, the second Mag Sevens event was to be a 15-lap sprint and some of the contestants in the earlier race elected not to start. That included the winner Stephen Nuttall, which elevated Tim and Christian to the top two places on the starting grid.

Again, Christian took it easy at the start, allowing Tim to grab a lead which he retained to the flag. Richard retired still troubled with a down on power engine. William pulled out with a rear wheel bearing failure.Peter finished ninth and second in his class, while Alex was 14th and top if his. Tim recorded the fastest race lap with Alex and William quickest in their classes.
Despite the retirements the week-end had produced good results for Boss Racing – but we were not done yet.

While Tim Davis swapped his Caterham Seven for his silver TVR Tuscan and made his own way to the Wiltshire circuit we headed for home once more. The following day, Nelson Love and I were off to support Tim.

We arrived just in time for scrutineering where the officials were giving Tim a hard time for something that had never arisen before. They objected to the cut-outs in the Tuscan’s bodywork which exposed the tops of the front wheels. After some discussion they agreed to let the car start but asked for the issue to be resolved before the car’s next outing.

There was more drama before the Tuscan was allowed on to the circuit for qualifying for the Dunlop TVR Challenge. A last-minute number change caused a hurried hunt for the correct digits meaning that Tim missed some of the qualifying. But he still managed to set fourth fastest time.

Before the race started there was another qualifying session, this time for the special 30th anniversary Tuscan Challenge race. And the drama continued. The car’s silencer became dislodged and warmed up the bodywork quite nicely, although the damage was limited to some singed fibreglass. We applied heat shielding to the silencer and exhaust, enabling Tim to qualify third.
There was yet more excitement to come. In the TVR Challenge race Tim was holding a comfortable second place but on the last lap his gearbox let go and he coasted home third. That meant that Nelson and I had a quick gearbox change to do, not an easy task with the broken one still red hot.

We managed it, though, but guess what happened in the next race. Tim was tussling for the lead when the new gearbox failed too. We reckoned that the bumps of Castle Coombe had been too much for it. In the event, only four runners finished the race. 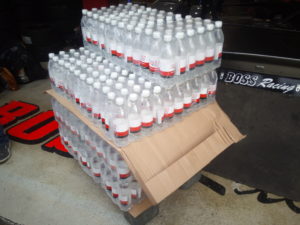 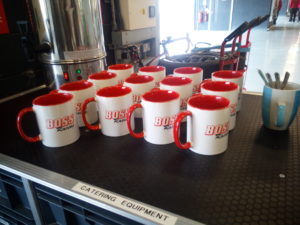 BARC, Brands Hatch
While we were at Silverstone and Castle Coombe Chris Whiteman was at the BARC meeting Brands Hatch in his Honda Civic Type R. The wrong tyre choice destroyed his chance of a good finish in the first race but a return to his normal rubber netted him the runner-up spot in the second.

Before his next visit to the Kent circuit we had the car in for engine set-up work which must have been effective because he responded by setting his quickest lap of the Indy circuit on 12th May.
And that was in a race with just two runners. Even so, Chris and Clio-mounted Terry Stephens put on a show in the BARC Tin Tops event, passing and re-passing. To nobody’s great surprise, Chris moved ahead on the last lap to take the victory.

Not unexpectedly, the second Tin Tops race was combined with the final Michelin Clio event and Chris started from the ninth row of the grid. He quickly moved up through the field though, and by the 12th lap was second and closing on the leader when his gearbox packed up.

Our next outing will be the CSCC’s Oulton Park meeting on May 27th. We’ll also be supporting Tim when he gives his TVR another airing at the American SpeedFest at Brands on 31 May.