It’s amazing the part luck plays in motor racing. At Dijon we had a generous helping of good fortune but we must have used up our allocation for the end of season Donington Park meeting or the Halloween Horror, as I prefer to call it.

Despite the wet conditions our drivers revelled in the flowing nature of the circuit where in 1979, Gilles Villeneuve and Rene Arnoux had their no-holds barred, wheel-banging duel for second place in the French Grand Prix that people still talk about 40 years later.

There was very little testing time available so all our drivers started their familiarisation by walking the circuit and came back with huge smiles on their faces. Although none of us had ever been there before we knew the circuit was fast and had geared the cars for 160mph top speeds – that surely was enough?

The weather was truly terrible as the cars assembled for qualifying for the first of the two open series races. Yet it seemed not to worry Tim Davis and Colin Watson whose times were comfortably faster than anybody else’s. In fact, Tim (Caterham C400 2400) was the only driver to lap below 1min 40 sec. Jonathan Pittard (supercharged Caterham CSR 2,500) lined up fourth with Richard Carter (Caterham R300 2000) seventh. Magnificent Sevens Series co-ordinator Peter French (Caterham Superlight 1800) 37th.

Much like qualifying the day before, the circuit was wet as the cars gathered in the assembly area. However, it had stopped raining and the track was slowly, slowly drying. There was no choice but to start the cars on wet tyres but would they last to the pit window? While a couple of the team kept watch in the assembly area the rest of us were pressurising, and stacking much of the 70 plus spare wheels and tyres we had taken with us ready for the pitstops.

In the race Colin took the lead from the start challenged by Jonny and Tim. These three made a terrific spectacle racing wheel to wheel at 150mph plus. This, it has to be remembered, was on a streaming wet track and in cars known to have the aerodynamics of a mechanic’s toolbox.

As the track continued to dry their pace increased and the team readied themselves for tyre changes on all four cars, no mean feat without centre-lock nuts and a sixty second window. But the heavens opened just before the pit window did and the pressure was taken off the pit crew and the pitstops all went smoothly.

The pressure now though was on the drivers. As the conditions worsened and with a constant stream of backmarkers to negotiate Tim, Colin and Jonny were walking the tightrope of having to push yet not make a mistake. It couldn’t last. Braking at the end of the start finish straight Tim made an uncharacteristic mistake spinning into the gravel. Colin and Jonny continued to battle but in the end Colin won by 15 secs. Richard was fourth in his class G car, missing out on a podium by just six seconds but he won his class while Peter French improved to 34th. Colin posted the fastest lap and, of course, won the Mag 7s section of the race. 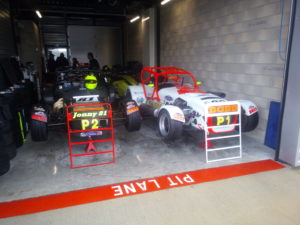 The finishing order determined starting positions for the second race, which meant that Tim was at the back of the grid. From pole Colin didn’t make the best of starts and with Christian Pittard – now racing for Team Leos – having a jump start and Jonny managing somehow to put 370hp down smoothly he found himself third by the second corner. Colin was revelling in the conditions and calmly took the lead by the end of the lap and with a clear track looked to extend his lead. His escape didn’t last long though as the safety car was out within two laps. Not only that, Tim had fought his way up to fifth and with the safety car bunching the field it was all to play for.

The pitstops went by in a blur of spray but disaster struck again for Tim with a broken throttle linkage and while he managed to get back to the pits for repairs his race was effectively over. At the front however the race was far from over. A half spin by Colin allowed Jonny to squeeze through and there followed a fantastic few laps click on the picture below for the footage. 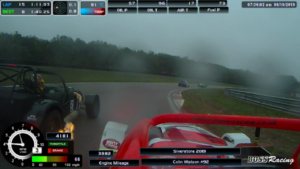 Once again Colin came out in the lead and with three minutes to go the race seemed in the bag. But no, once again the pendulum would swing as he lapped a BMW which clipped his back wheel, buckling the rim and taking the tyre off. Limping in to the pits we were by now beginning to pack away all spare wheels and equipment. A wheel was grabbed that was vaguely the right size and shape and gunned on but as Colin tore up the pit lane it seemed any chance of victory had gone. With Jonny now long gone in the lead he joined the circuit only to see red flags at the first marshals post.

With only one minute to go the race was ended but as the cars toured back to the pit lane and the drivers waited to go on to the podium the officials tried to work out who had won. The rules say that due to the red flag the results are taken from the end of the previous lap but no one knew if Colin was leading at that time or if he had left the pit lane before the red flags. After a further ten minutes of deliberation the win went to Colin, a cruel result for Jonny who was leading when the race was stopped. Richard was again fourth, winning his class with another great drive and closing on a podium position as the weather deteriorated. 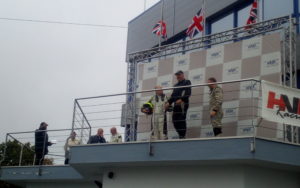 So a great weekend in terms of results. The drivers left planning a return in the dry to what is a marvellous circuit and we left wondering if that top speed of 160mph would indeed have been enough? Jonny Pittards supercharged CSR hit 154mph in the wet and it was testament to the skill and bravery of the Boss drivers that all the cars were packed away in one piece. 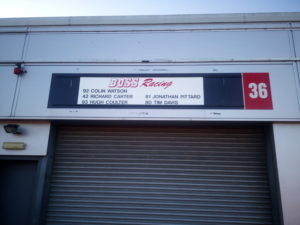 Anyone who has competed or spectated at motorsport will know that it is a cruel mistress but we arrived at Donington full of confidence. And of course umbrellas, yet again it was raining.
There was limited testing for our drivers but Richard Carter still suffered what we in the trade call terminal engine failure. The less knowledgeable call it a blow-up. This was also the weekend when we suffered no less than four alternator failures, cause unknown.

The weather was bright and dry for qualifying for the Mag Sevens race. Tim Davis posted third fastest time but his success penalty dropped him to 13th on the grid, while Colin Watson was trying different suspension settings and had his fastest lap time disallowed for infringing track limits. Jonathan Pittard’s supercharged CSR, always quick in the wet, had completed relatively few dry laps and ended up fifth.

Class rivals Hugh Coulter and Peter Hargroves were 13th and 21st respectively. Hugh was first in class while Peter was having his first outing since Thruxton. The Redman father and son team (Caterham 420R 2000) started a class-leading 35th.

After the rolling start Colin got blocked in at Redgate as Tim hauled himself from 13th to third on the opening lap. He was soon in the lead with Colin now in fourth and battling for third. Jonny though, was having a torrid time when his engine went into “limp mode” on the opening lap. He made six pit stops to clear it but eventually finished unclassified.
As Autosport reported, “Tim Davis slipstreamed his way to the front until his pitstop where he couldn’t get his Caterham C400 to restart.” In fact, his battery died as he was entering the pits for his mandatory stop on lap 7. We changed it and the alternator and got him out again, albeit eight laps down. Believe it or not his engine expired on the last lap. He, too, was unclassified.

Colin, battling with the lead pack had run wide at Coppice in the opening laps leaving himself beached in the gravel and out of the race.

Hugh and Peter had been fighting for class honours as usual but they had a coming together and Hugh failed to stop during the pit stop window. That meant a two-lap penalty which dropped him to 25th at the finish. The Redman team was classified 23rd despite a grassy excursion. 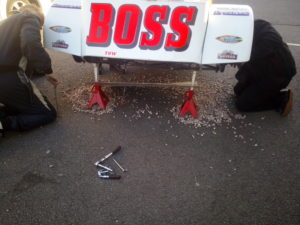 We had little time to prepare for the night race. But we managed to dig Colin’s car out of the gravel and get our spare number 93 ready for Tim to race. We were ready, with permission to go to the grid, with just five minutes in hand. Tim was in civvies all set to head for home, but he managed to get suited up and on to the grid.in time.
Instead of being on the pole position he had earned with his own car he was relegated to the back of the gird with Colin second. The Redman team, about to race after dark for the first time, was 23rd. 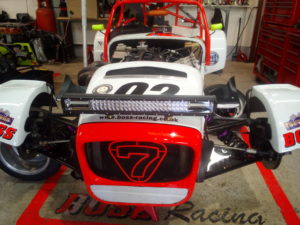 At the start, Tim made one his lightning getaways and was soon up to second. Colin though was punted in the back by another competitor while leading going through the Craner Curves and once again ended in the gravel. This time he managed to get back on the track but stopped soon afterwards with his lights dimming due to another flat battery.

We went through the now familiar routine of changing both battery and alternator but Colin was now 13 laps down. He battled on gamely but was unclassified at the finish. Meanwhile, Tim managed to salvage a decent result by finishing second to a very quick BMW M3. He set the fastest lap of the race in a time that would have been quick during daylight never mind after dark. The Redman team finished 15th having greatly enjoyed their first taste of night racing.

By Boss Racing’s standards the Donnington Park Halloween Horror was a disaster, at the end we simply stared at each other in disbelief but perhaps it’ll stop us getting complacent and determined to do even better in 2020.

Anyway, as I said before, that’s motor racing.