It was the closest finish ever seen in a Classic and Sports Car Club race: the first three cars crossing the line separated by just two tenths of a second after 40 minutes of racing, pit stops and a safety car interlude.

The Gold Arts Magnificent Sevens race run on the Brands Hatch Grand Prix circuit on 1 September was dominated by cars prepared and entered by Boss Racing. The previous weekend these same cars and drivers had done the same in both the CSCC Open Series races run on the Indy circuit.

We were supporting cars competing in two of the series being run over the blisteringly hot Bank Holiday weekend for in addition to the Sevens were also looking after Keith Vaughn Williams’ TVR Chimaera.

This car, which has now acquired the nickname of Christine from the movie of that name about a car with a mind of its own, was entered in the Cartek Modern Classics race which opened the week-end’s programme.

Keith qualified sixth on the grid but in the race he moved steadily up the field as some of the quicker runners dropped out. His pit stop went well and he was helped by a safety car interlude. At the finish he was second, 22 sec behind the winner.

Tim took the lead at the start and held it for the first eight laps with Christian and Colin in close attendance. But Tim suffered a soft brake pedal and dropped back to third at the finish with Christian in his bright orange car 2 sec ahead of Colin at the flag.

Richard was fourth and first in class, but Hugh inadvertently turned his ignition off while changing gear and coasted into the pits with a dead engine. We managed to get him on his way quite quickly and he finished eighth, just one place ahead of Hugh. The Redmans finished 12th. Colin recorded the fastest lap with Richard quickest in his class.

Colin started the second race from pole position with Tim alongside him. Richard was third, while Charlie Redman started seventh. Christian elected not to start this race and Peter was also a non-starter.

Tim led from start to finish with Colin close behind, although he dropped back with gearbox box issues to finish just over seven secs behind. Richard was fourth and Charlie Redman eighth. Tim put up fastest lap with Richard again quickest in his class.

With the series celebrating its first decade, the lure of driving on the grand prix circuit attracted a big field for the Magnificent Sevens race on 1 September with a total of 51 entries.

In qualifying Tim Davis was fastest of them all with a time three-tenths of a second quicker than the next runner with Christian Pittard fourth and brother Jonathan in his matt black supercharged CSR 2500 fifth. Colin Watson in the number 92 C400 2400 was credited with sixth place after being penalised for exceeding track limits. Hugh Coulter was tenth and first in class, while series co-ordinator Peter French (Superlight 1800) was 47th.

The stage was now set for what Autosport described as “frantic action” and that’s what we got. Christian leap-frogged Tim from the second row of the grid but Tim soon passed him to build a comfortable lead, while Jonathan and Colin tussled for fourth. A safety car interlude encouraged Jonathan to be the first of the Boss runners to make his pit stop with Christian following him.

Tim fell to fifth after his stop but soon powered back to second place. This became first when the leader made an unscheduled second stop and he again opened a gap to Christian and Colin. They reeled him in, however, so that the order was closing up again towards the end of the race. Colin dropped back after a quick trip into the gravel at Clearways and Christian snatched the lead from Tim on the last lap.

As Britain’s three fastest Caterham Sevens rocketed out of the last corner on the last lap a determined Tim squeezed past Christian in what Autosport described as an “audacious move.”  Tim said later: “I wanted that one.” he said later. Christian had the consolation of recording the fastest lap. Hugh Coulter was also quickest in his class.

In addition, Tim Ralph (25th), Alex Harbour (27th), Ben Rowsell (33rd) and Chris Biglin (DNF) were all using engines built by Boss Racing.
The result of this Mag Sevens race meant that three different Caterham variants in various stages of development recorded almost identical lap times in their domination of the what is now recognised as the fastest of all the many series for Caterham-type cars.

To put this achievement into perspective, Tim Davis’ pole-winning time would have placed him tenth on the grid for the GT Cup Championship, the week-end’s feature race.

And that’s a great tribute not only to our determined and skilful drivers but also to the whole Boss team who have worked hard to give their customers a unique opportunity.

You had to be called Watson to win a Magnificent Sevens race at Anglesey. Our own Colin Watson was victorious in one of the two Gold Arts sponsored events at the Classic and Sports Car Club’s July meeting. David Watson (no relation), scored in his rapid motor-cycle-engined Spire the following day. Overall, though, it was another successful weekend for Boss Racing customers with a win, a third, several class victories, a pole and some stirring drives. 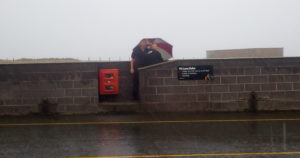 We arrived on the Thursday evening after an 8.5hr journey. The following day’s test sessions were run in wet and dry conditions. The main drama concerned Graham Charman, back in the Caterham fold after a spell with a Ginetta. He broke a gear selector spring and had to send to Essex for a replacement. By contrast, Jonny Pittard’s supercharged 2500 Caterham CSR was running really well and able to show its true potential at last. In the wet Tim Davis and Nick Powell and son, newcomers to our team, were the only Boss runners to venture on to the track. 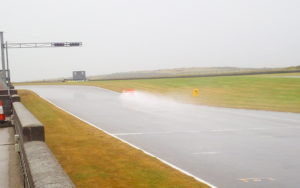 Qualifying also produced its dramas. The weather continued changeable and rain started falling when the cars were in the assembly area. We had to change Jonny’s tyres several times but it was well worth the effort as he secured pole. Tim was second quickest, but then his car was side-lined when a stone entered the engine and snapped a valve. As it happened, we had a Supersport 1600 with us which we planned to run at a Silverstone track day after the weekend. Tim was able to use at Anglesey with the CSCC’s permission. Colin in our number 92 C400 2400 struggled with tyre choices but still set fifth fastest time, while Graham lined up eighth in his Superlight 1900. Hugh Coulter (C400 2000) was tenth and the Powells were 14th with their Supersport 1600. Peter French (Superlight 1800) was 37th, while Tim started from the pit lane.

Jonny took the lead when the lights went out but a small mistake dropped him behind the duelling duo of Colin and Gary Bate. After 19 laps and a mandatory pitstop, Colin took the flag to win by just under a second. Hugh lost a place due to a 60-sec penalty for pit lane speeding but still finished eighth and second in class. Tim, who’d stormed from a pit-lane start to 20th overall just failed to pip the Powells for fourth in class. Peter was 31st and second in class but Graham was a non-starter due to a second gear selector spring breakage. 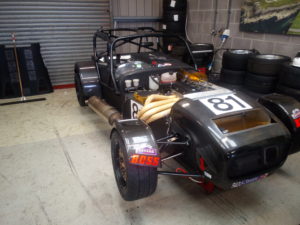 The race had been run on Anglesey’s International circuit but the second, the following day, used the shorter Coastal Circuit which limited the number of competitors allowed to take part. Consequently, Tim and Graham were listed as reserves.

Colin took a winner’s penalty and lined up sixth but otherwise the field started according to the previous finishing order. The start was chaotic. David Watson stalled his engine and was rear-ended by another car. The red flag was shown, the race was cut to 20 min and the pit stop “window” kept open for the whole race.

Most runners took the opportunity of a virtual safety car interlude to make their pitstops but not Colin and Jonny. They missed our increasingly frantic signals from the pit-wall. We even resorted to shouting at them! The result was that they were leap-frogged by the rest of the field. Yet by the flag, Colin had recovered to ninth and Jonny tenth. Colin set the fastest lap of the race. Hugh was our highest-placed finisher with a terrific fifth overall in his class H car. There was another impressive come-back drive from Tim who was able to start, but from the pit-lane, finished 15th, a place behind the Powells. Peter French was 32nd after incurring a two-lap penalty for a pit-stop infringement.

The overall winner on track was Gary Bate but he too was penalised for pit-lane speeding so it was David Watson who was awarded the victory from a pit-lane start.

Keith Vaughn Williams was also in action over the week-end. In his 5-litre TVR Chimera he lined up 17th for the first of two (deep breath) Cartek Motorsport Modern Classics and Advantage Motorsport Future Classics Series races. It was Keith’s first outing on the International Circuit and he did well to finish 16th after incurring a 60-sec penalty for pit-lane speeding. For the second race, on the more familiar Coastal Circuit, his lap times improved consistently and he took an excellent eighth place and third in class.

We return to our home circuit for our next CSCC outing on 25/26 August. 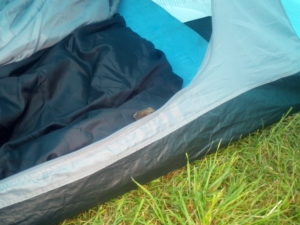