It’s been a long winter for us at Boss Racing but spring is here, the daffs are out and so are we! And already we’ve had three successful outings this season, at Brands Hatch, Snetterton and Silverstone.
Since the end of the last season we’ve been flat out – as usual – at our Longfield base near Brands Hatch, preparing for 2016. Lots of customer race cars have been in to be prepared for the new season and we’ve added a new car, a Caterham SV with wider cockpit, to the track-day hire side of the business.
But before going on to talk about the way we started 2016 I’d like to thank those of you who voted for us to receive the MotorsportDays.com team trophy. You’ll forgive me, I hope, if I repeat a few of your kind words: “Well organised, friendly, high quality work” and “Excellent preparation, friendly towards other competitors, and support for many different cars and series.” The website itself noted: “Without doubt, this team leads by example.”
We also won the British Automobile Racing Club South East’s Twosome’s team trophy. It was a great honour to receive these prestigious awards on behalf of the team at the BARC awards evening in February. It was also very humbling because I’m only too well aware that it couldn’t have happened without the hard work of the whole team. Thanks guys, for making Boss Racing such a successful team in 2015. 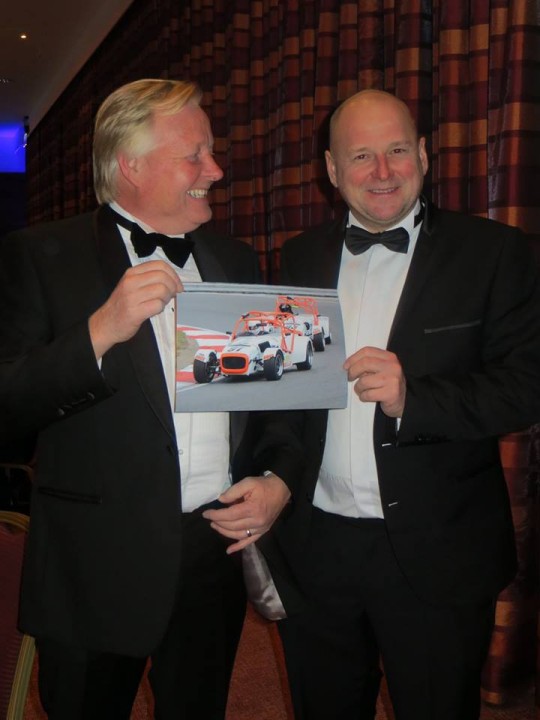 The two races were to be run concurrently with a split grid enabling the Intermarques to start first and the Sevenesques 10 seconds later. Ian Conibear and myself shared the front row of the Sevenesque grid but Ian had the better start and led in to Turn 1. With a good run through the last two corners, I passed Ian on the second lap. But my lead was short lived. Ian’s Class 1 car had too much power on the long straight for my Class 3 car.
On lap seven, the Class 1 Seven of Gary Bate breezed past me on the straight but two laps later I got a run on him through Turns 1 and 2 just as Gary was trying to pass Ian. Gary re-joined the racing line at Turn 3 but that un-sighted me. I took to the grass and swung into a 360-degree spin. So with just two laps left I had to settle for third. Rob Grant made it to fourth and Peter was sixth.
It was a top seven reverse grid for Race 2, which put me fifth for the start. Peter was on the front row in second and Rob was fourth. I made a great start but Gary’s was even better. By Turn 2 he was leading with me second. We changed places several times until, on lap 10, I managed to put a back-marker between us and break his tow on the back straight. That left me clear to win. Peter was fifth but Rob was classified as a DNF due to a misunderstanding with a flag.
I learned later that I was voted driver of the day. Great stuff!