What a difference a day makes: on Friday we were messing about with bits of cardboard but on Saturday we were taking home the silver.

Let me explain. To enable our cars meet the noise requirements at Oulton Park we found ourselves, along with many of the most powerful cars, making airboxes from carboard and tape to deaden the engines’ induction roar. We’d never encountered such problems before and I can’t explain why we did on this occasion but we were fortunate on two counts: we’d arrived at the circuit a day early and we had plenty of cardboard available!

There were more noise issues on the pre-race test day when we had to cut open Richard Carter’s silencer and re-pack it. But that was to be the least of his troubles – and ours too. Later in the session his clutch exploded and cracked the bell-housing, so we spent the evening removing his engine and gearbox to replace it.

Qualifying for the Gold Arts Mag Sevens race the next day ended with our driver coach, Darren Burke, two seconds faster than anybody else which was fine except that he wasn’t in one of our cars! The changeable weather made tyre choice something of a lottery but in the end Colin lined up fifth, Tim Sixth, Richard ninth, Hugh 10th, Peter H. 13th and Peter F. 20th.

There was little doubt about the weather for the race itself. It started wet and got wetter. Colin was having a good run in sixth place but as the rain intensified he aquaplaned off and hit that wall hard. Several other runners did the same and the race was red flagged after 17 laps. Tim finished second after a close race with the redoutable Gary Bate. The pair had a few grassy moments but Tim forced Bate to settle for third. Richard was seventh, Peter H 14th and Peter F 17th. Tim won his class, as did, Peter French, although he was the sole runner. 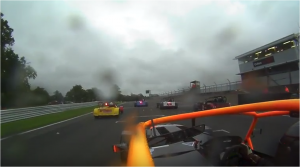 The changeable weather had made qualifying for the Meteor Suspension Open Series seem watching like an F1 session with successive drivers putting up the fastest time. As the chequered flag dropped arch rivals Gary Bate and Simon Smith were P1 and P2 and looking secure. However the Boss drivers were still on their final flying laps and timing their runs to perfection as first Tim, then Colin jumped to the top of the time sheets to lock out the front row. Colin was the last to go and ended up on pole, nearly a second ahead of the pack and the only driver to get below 1min 50 secs. Tim was second, Richard ninth and Hugh 19th but his gearbox let go and as we had no spare he was a non-starter.

The Boss team had little more than an hour between races to repair Colin’s damaged car. And there was quite a lot to do. He needed a new nose cone as well as the upper and lower wishbones but we got him to the grid in time.

From the start, though, Colin and Tim seemed to be going in different directions. When the lights went out Colin got bogged down with wheelspin, while Tim headed for the front. The race was shortened by poor visibility but not before Tim and Jonathan Mitchell had spent most of the race swapping the lead. Tim was no doubt pleased by the organisers’ decision to show the chequer after just ten laps but Colin, heading for third, could probably have done with a longer race. Richard Carter, handicapped by his tyre choice, was seventh. Hugh Coulter was a non-starter.

As the season winds down both our next two outings will be at our local track, Brands Hatch. Meanwhile the workshop continues to be full of cars, but we do have some cool new toys to play with!

We’ve recently had installed a Maha car lift installed which, while being a fantastic piece of kit also levels itself at whatever height it is set to. This means that ‘flat floors’ are easier and more accurate and it works in conjunction with our Hofmann computerised wheel aligner. We can measure a car six feet in the air while walking underneath to adjust it – luxury! 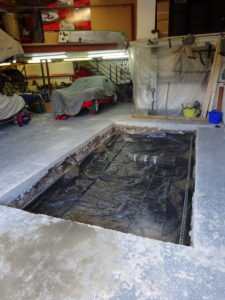 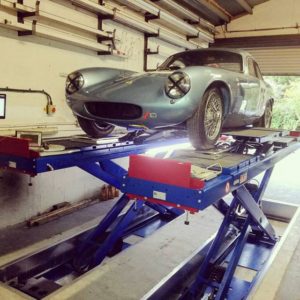 Finally, anyone who is involved in motorsport knows you always need a little bracket to hold something on or a widget to do this and that. So we decided to buy a 3d printer for those odd parts that are tricky to make. The reality is that it has been running round the clock recently as we push what it is capable of. Some of these parts – dive planes, mirror mounts, brake ducts – will become available over the winter as they are tested and signed off, watch this space! 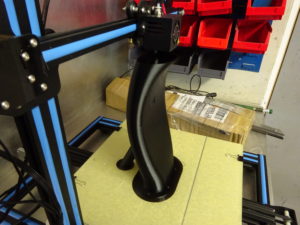