Rob’s Blog: The Start of the TVR Season

The first race meeting of the season is always a bit special, it’s a chance to blow out the cobwebs and set out the goals for the new year. But last weekend at Donington Park was even better than usual for us. We came away with two podium finishes, a win and a second place, or rather, Tim Davis did. But it should have been two firsts if you ask us!

Inevitably, Tim’s engine was installed in his silver TVR Tuscan just before we left for Donington, obviously this wasn’t idea but we’d already planned to use this meeting, which featured the first two rounds of Bernie’s V8 Challenge, as something of a shakedown.

Even though the Tuscan, with its 4.5 litre AJP V8 lump has proved pretty reliable and won last year’s Dunlop TVR Challenge, we always have to expect the unexpected, especially at the beginning if the season. But we encountered no issues in practice or qualifying. In fact, Tim qualified in pole position for both the combined SR&GT Challenge and Bernie’s V8 events by a comfortable margin. 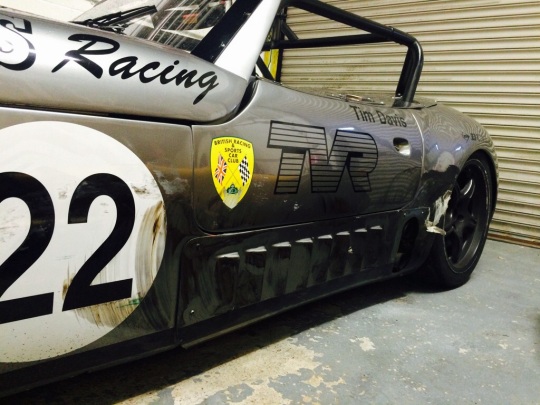 Back in the garage following a successful weekend

There was a problem, though, and it surfaced during the first race. Tim was well up and just about to mount a challenge for the lead when he found his gearbox stuck in second. That meant settling for the runner-up slot behind the rapid Ram Cobra of Cheng Lim. We later found that the linkage between the gear lever and the gearboxbox had parted company.

In the second race Tim was able to capitalise on his pole position but dropped back to third. When the second-place man’s exhaust parted company Tim was forced to take avoiding action. But that certainly didn’t disturb him and he was soon able to put the Ram Cobra behind him. By the time the race entered its closing stages Tim was actually lapping 2 seconds faster than the rest of the field and was able to win comfortably.

So that was it – a pretty decent weekend. All that took the edge off of it for me was developing a cold. I was pretty husky on Friday but Donington was chilly, so I wasn’t entirely unhappy that our races were both on Saturday. That meant I could go home and spend the rest of the weekend in bed. The (medicinal) whisky was some compensation, though.